The Itzpapalotl, or black Butterfly goddess myth in Aztec culture.

In Aztec mythology, the warrior goddess, Itzpapalotl is associated with the Black Butterfly and referred to by name as 'the Obsidian Butterfly'.

In the Aztec religion, Ītzpāpālōtl, is also known as the "Obsidian Butterfly" and was depicted as a skeletal warrior goddess who ruled over the paradise world of Tamoanchan-- the paradise of victims of infant mortality and the place identified as where humans were created. Although Itzpapalotl is sometimes symbolically associated with birds and fire, she primarily appears in the form of the Obsidian Butterfly. 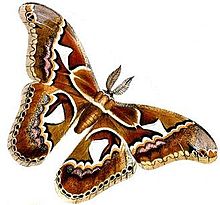 Itzpapalotl's name can either mean "obsidian butterfly" or "clawed butterfly"; the name 'clawed butterfly' refers to the bat. In folklore, bats are sometimes called "black butterflies". Itzpapalotl is sometimes depicted with bat wings, as well as sometimes having the attributes of an eagle. The style of her wings are described as being obsidian or flint (tecpatl) knife tipped, hence the name "Obsidian Butterfly". She could appear in the form of a beautiful, sometimes seductive goddess with flowing hair, or a horrific goddess with a skeletal head, jaguar claws, and butterfly wings supplied with stone blades.

The name Itzpapalotl stands for purfication or rejuvenation by sacrifice of that what is precious. One Aztec myth describes how Itzpapalotl camouflages herself as a Black Butterfly to devour souls during a solar eclipse. In many cultures the black butterfly is a symbol of death and transition, transformation, renewal or rebirth.