Amazing factoids and info about butterflies!

Butterflies are part of the class of insects in the order Lepidoptera, which includes both butterflies and moths. Butterflies are divided into two main groups called skippers (hesperioidea) and true butterflies (papilionoidea). Butterflies can be found living in all type of environmental conditions, such as, hot and cold, dry and moist, at sea level and high in mountains. Most species are found in tropical areas or rainforests. Like other holometabolous insects, the butterfly's life cycle consists of four parts: egg, larva, pupa and adult. Most species are diurnal. A group of butterflies is sometimes called a "flutter". Many caterpillars are covered with stinging hairs which carry a toxin that can be quite painful to humans if touched. The process by which a caterpillar transforms into a butterfly is known as Metamorphosis. The entire process is completed in 10 to 15 days, depending on the species. There are about 20,000 known species of butterflies throughout the world.

Butterflies and insects have their skeletons on the outside of their bodies, called the exoskeleton. This protects the insect and keeps water inside their bodies so they don’t dry out.

Butterflies are diurnal insects; they tend to only be up and active during the day, as opposted to moths which are nocturnal and come out at night. Although some butterfly species, such as the Northern Pearly Eye, will fly at night. Butterfly fossils date back to the Palaeocene epoch, about 56 million years ago. Butterflies evolved from moths. The earliest Lepidoptera fossils are of a small moth, Archaeolepis mane, of Jurassic age, around 190 million years ago. Butterflies usually range in size from a tiny 1/8 inch to a almost 12 inches (1 foot) in size. Butterflies are the second largest group of pollinators in the world, while bees are the first. The smallest butterfly has a wingspan of .62 inches (1.5 cm). The largest butterfly is the Queen Alexandra Birdwing which has a wingspan of 12-1/2"

Female butterflies weigh more than the males. The average weight of a male butterfly is .50 grams, and the average weight of the females is .53 grams. Butterflies don't have lungs, but breath through openings on their abdomen called 'spiracles'. A common misconception is that if one touches a butterfly’s wing and the ‘powder’ rubs off that the butterfly will not be able to fly. The powder is actually tiny scales and a butterfly sheds these ‘scales’ throughout its lifetime. Butterflies are very good fliers. They have two pairs of large wings covered with colorful, iridescent scales. Butterflies (and moths) are the only insects that have scaly wings. The wings are attached to the butterfly's thorax (mid-section). Butterflies smell by using their antennae, palps, legs, and many others part of the body that are studded with sense receptors. Butterflies are found on every continent in the world except Antarctica. The popular Monarch butterfly is native to the Americas, but by the nineteenth century, they had spread to the rest of the world. Monarch butterflies journey from the Great Lakes to the Gulf of Mexico, a distance of about 1,800 miles, and return to the north again in the spring.
Throughout history, butterfly imagery has been used more frequently in “decorative objects” than most other living creature.
Different species of butterflies can fly at different speeds; from 5 mph to 30 mph (8 to 20 kilometers per hour). The record flight speed of a butterfly is 12 miles per hour. Skipper butterflies fly so fast they could outpace a running horse.

A caterpillar’s first meal is its own eggshell. It then spends most of its time eating the leaves of the plant on which it hatched.

An adult female butterfly will lay around 100 egs. Butterfly eggs come in many shapes and colors. The shapes include spherical, oval, and pod-shaped; the colors include white, green, and yellow. Some species prefer to lay eggs all in one group, while others prefer to lay single eyes scattered on many plants. Once it emerges from its chrysalis as an adult, a butterfly spends its short life focusing all its energy mainly on two tasks – eating and mating. Butterflies don't have mouths. Instead, they have a long straw-like body part called a Probiscis that they use to drink nectar or other liquids. Butterflies also have tiny taste sensors on their feet. Butterflies are mostly nearsighted. Their vision is better up close but becomes blurry beyond a 10-12 foot distance. Butterflies have immbobile, compound eyes that are made of 6,000 lenses . Butterflies can detect colors such as red, green, and yellow, and also a range of ultraviolet colors which are invisible to the human eye; plants have developed ways to communicate their nectar availability to butterflies using this light spectrum. Amazingly, flowers that are white, pink, purple, red, yellow and orange attract the most butterflies. Blue to green flowers are universally the least favorite flower color.

Adult butterflies are attracted to certain plants and flowers; they also tend to favor pollinating red, yellow, orange, pink and purple blossoms that are flat-topped or clustered and have short flower tubes. Adult butterflies can only feed on liquids, usually nectar. Their mouthparts are modified to enable them to drink, but they can't chew solids.

Male Butteflies drink from mud puddles to extract minerals that are not available in flowers. This behavior is known as “puddling.” -- “Puddle clubs” are groups of butterflies that gather at wet soil to suck up salts and minerals. Strangely enough, some butterflies have been seen drinking blood from open wounds on animals. Many butterflies can taste with their feet. Taste receptors on a butterfly's feet help it find its host plant and locate food.

Although admired for their vast array of colors, butterfly wings are actually clear and transparent. The colors and patterns we see are made by the reflection of the tiny scales covering them. Butterfly wings are formed by thin layers of chitin, the protein that makes up an insect's exoskeleton. Thousands of tiny scales cover the transparent chitin, and these scales reflect light in different colors--and this is what gives the butterfly its unique colorful appearance.

Butterfly wings move in a figure “8” motion that pushes the butterfly through the air. The Painted Lady is the most wide spread butterfly species in the world, occurring on all continents except South America and Antarctica. When a butterfly first emerges from its Chrysalis, it has tiny, shriveled wings, and can't fly. The butterfly must immediately pump body fluid through its wing veins to expand them. Once its wings reach full-size, the butterfly must rest for a few hours to allow its body to dry and harden before it can take its first flight. On average, butterflies only live about 2-4 weeks. Some of the smallest butterflies, the blues, may only survive a few days. Butterflies that overwinter as adults, like monarchs and mourning cloaks, can live as long as 9 months. The Brimstone butterfly (Gonepterix rhamni) has the longest lifetime of an adult butterfy; it can live as long as 9-10 months.

There are many reasons why butterflies have their colors, such as to absorb sunlight for warmth, attracting a mate, and as camouflage to ward off predators. Some of the common predators of butterflies include: wasps, ants, spiders, parasitic flies, dragonflies, birds, snakes, frogs, toads, rats, lizards, and monkeys; in some countries butterflies are even a delicacy for humans.
Many adult butterflies never excrete waste because they use up all the food they eat for energy. In some areas, the number of feeding caterpillars on plants is so great that the sound of the 'muching' can actually be heard. Some butterfly species will lay their eggs on only one particular type of plant. Many butterfly species also make use of camouflage, mimicry, and aposematism to evade their predators. The greatest threats to butterflies are habitat change and loss due to residential, commercial and agricultural development. Climate change is also threatening species of butterfly. Collecting butterflies was once a popular hobby; it has now largely been replaced by Butterfly photography, recording, and breeding butterflies for release into the wild.

After over 25 years of field photography and scouring through museum insect collections, Kjell Sandved succeeded in finding all characters of our current alphabet within the astoundingly beautiful and varied wing pattern designs of butterflies and moths. In ancient Greek the word for butterfly is "Psyche", which translated means "soul". The butterfly and its unique life transformational process has spiritual meaning in many cultural and religious traditions from around the world. There are various myths, folklore stories, Legends and superstitions associated with the butterfly. 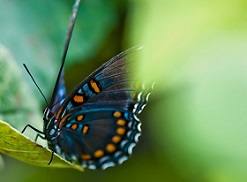